Skin Regenerated.
The one skincare for the one you.
AQ MELIORITY

Everything Just for You
The new true beauty for your natural skin.
AQ MELIORITY

To bring out the true beauty from everyone and each skin type:
AQ for Absolute Quality.
MELIORITY for superior technology
Since its inception,
DECORTÉ has always maintained a principle of best technology
to achieve absolute quality,
and AQ MELIORITY represents the culmination of this work.
The high value placed on the skin’s regeneration mechanism has driven,
and continues to drive, consistent efforts to explore new possibilities for cosmetic products.

Sensibility and Technology
It’s the sensibility to recognize textures and fragrance
inherently pleasant to the skin and spirit
combined with technology based on the latest dermatological research.
It’s the zenith of DECORTÉ technology,
and all beauty ingredients are carefully selected and formulated to optimize benefits.
AQ MELIORITY is the most sophisticated premium* skincare line,
imbued with the ultimate in DECORTÉ techniques and spirit.

Benefits Deeper than Skin Expect AQ MELIORITY to change your appearance,
confidence, and mind, brightening your life for good.

The skin has the power to reawaken life, vitality, and beauty.

The focus when developing AQ MELIORITY was on the skin’s regenerating mechanism that delivers profound effects to complexion and mind. We want to help maintain health and beauty under all conditions and guide skin, appearance, and mind to a youthful state.

The solution was found inside each of you The goal is to bring out ultimate beauty. It’s the original beauty that skin desires to regain. It’s as if the skin’s memories are reawakened and revived, providing blissful, natural skin that’s alive with softness and elasticity. AQ MELIORITY will brighten your skin for life.

Bliss and Brightness for the Skin and Mind The strong values of DECORTÉ are all combined.

Advanced dermatological research and technology, beauty ingredient complex, effects on skin, texture, fragrance, and even design come together in New AQ MELIORITY.
AQ MELIORITY is the manifestation of performance with an eye to ultimate quality, and the utmost hospitality that guides skin to the restful state to be more beautiful.

Technology
Technology to enhance the beauty ingredients’ affinity with the skin, and lavishly deliver them deep into the stratum corneum.

Effects on the skin
To realize the ultimate in bare skin, equipped with both softness and suppleness as if the skin itself has been renewed.

Texture
The ultimate texture that blends with the skin as if becoming one with it, which both the skin and the brain feel to be nice and pleasant.

Fragrance
A blissful fragrance which, despite having luxurious elegance and sweetness, makes the wearer perceive freshness.

Design
A design that envelops the air with brilliance, bringing about a sense of joy as if wearing a piece of jewelry.

Each beauty ingredient for AQ MELIORITY 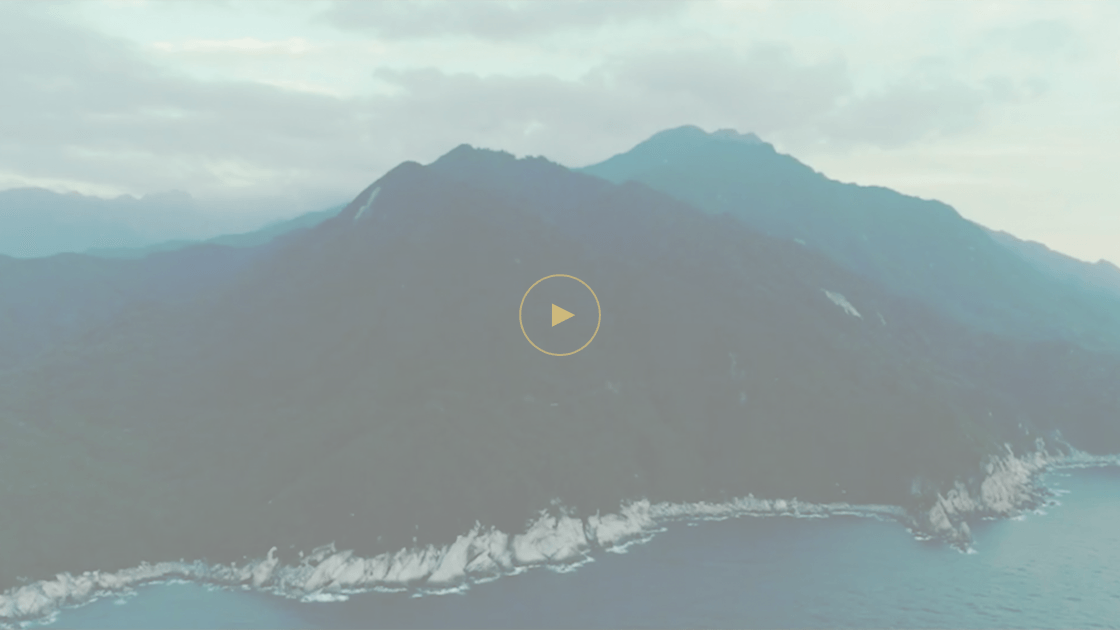 Benifuki is a tea leaf grown with the waters and the fertile soil of Yakushima, an island of circulation and regeneration, registered as a UNESCO World Heritage Site. When the tea leaves, which were carefully grown organically, have stored the blessings of nature to the fullest, they are lovingly picked one by one by hand at the optimal timing. The extracts that had been drawn from the tea leaves contain an abundance of methylated catechins and polyphenol. 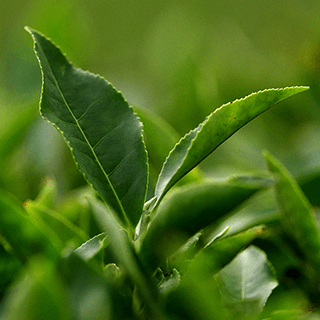 A new variety of tea leaf, created after 25 years of research by the Tea Research Foundation of Kenya, located right on the equator. Murasaki cha, which means “purple tea” in Japanese, is cultivated in the highlands, approximately 2,000 meters above sea level. Because it grows under strong UV rays, it contains large amounts of polyphenol and includes anthocyanin as well. The core at the tip of the leaf and the two leaves underneath, considered the rarest parts of this murasaki cha, were carefully handpicked and made into an extract. 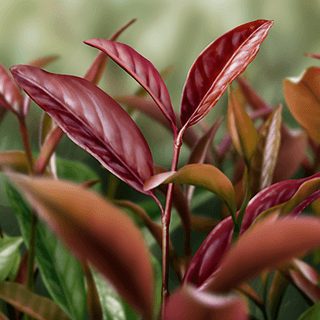 White mucuna bean extract is a blessing that was carefully selected from plants which have been passed down since the ancient ages. It is an ingredient that took note of the skin’s hidden revival power and the mechanism to awaken a woman’s beauty, and it forms the basis for polishing the skin and sensibilities. 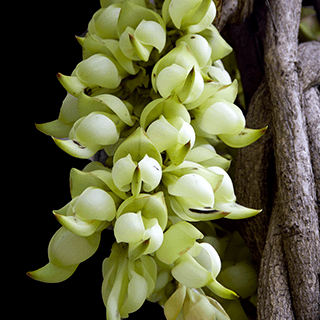 A composite component featuring the sap of rare white birch that contains an abundance of natural minerals and amino acids, and which can be harvested only during the four weeks immediately prior to the melting of snow, and white birch extract that has condensed the effects of the bark. 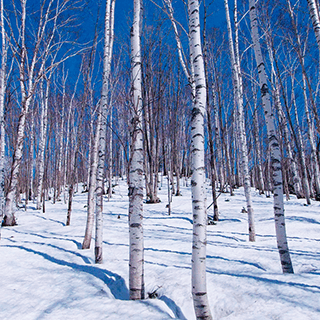 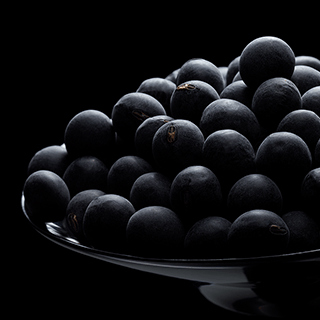 Vibrant Radiance for the Skin Enveloping
the skin in a sense of bliss,
suffused through the interaction among fragrance,
texture, and effects on the skin.

The ultimate texture of comfort to the skin and the brain

From the moment you put it on your skin, it melts into the skin, even melting the heart. It blends into the skin to become one with the skin, as if the skin were instinctively seeking it. This is the ultimate in delicately refined touch, born of a fusion of the finest ingredients. 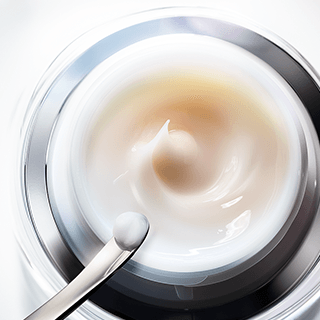 A blissful fragrance with elegant, luxurious sweetness and freshness

This green floral woody scent is accented with Winter Sweet, which blooms with dignity even in the harsh, snowy nature. The scent is elegant, luxuriously sweet and fresh. The fragrance of AQ MELIORITY will transform your skincare and makeup routine into a moment of bliss. 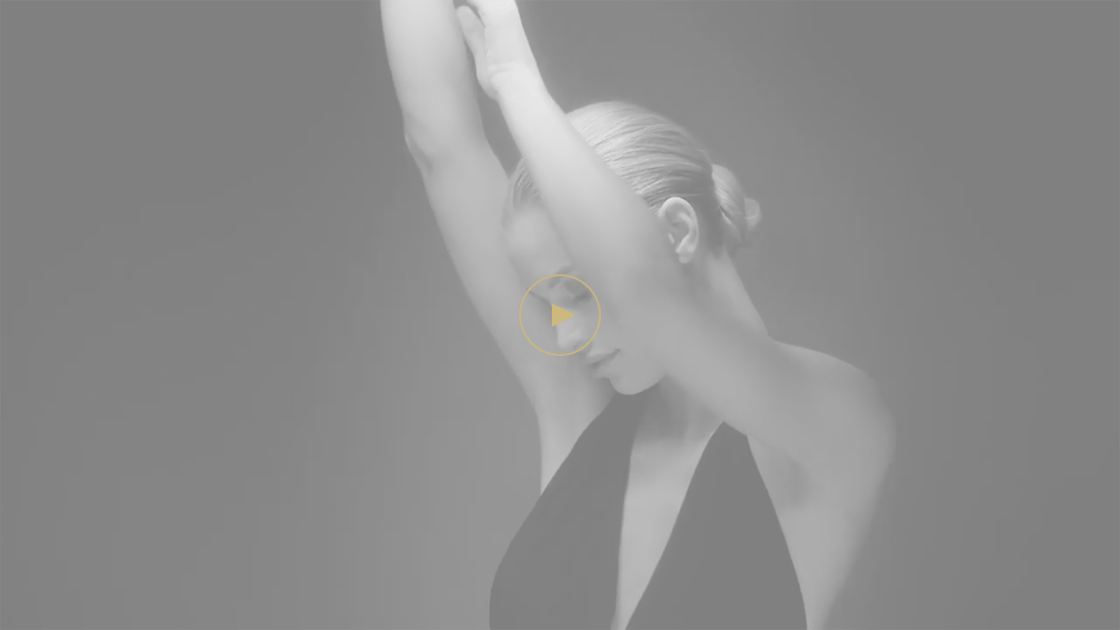 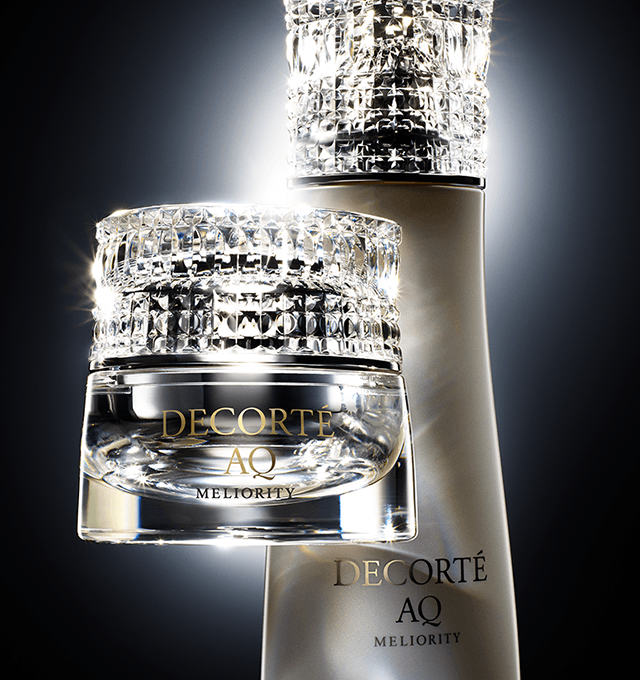 The Joy of Luxuriousness,
Like Fine Jewelry Experience brilliant luxury by design.

The package, with a unique flowing curve, was designed with the delicate, elegant and beautiful curves of a woman’s arm in mind.
It reminds us of a huge bracelet shining on a woman’s arm that is asymmetrical and organic.
Modern, classical and provocative.
The glass surface was cut in ways reminiscent of crystals and diamonds.
Each time you pick it up, the package brings about the joys you feel the moment you wear a piece of jewelry, and a sparkle as if illuminating your skin’s future.